Happy Monday to my faithful readers!

I was going to talk about the 4th law of leadership, but I ran across powerful video that Anthony Robbins shared to his subscribers, on leadership.

The Three Mandates of Leadership 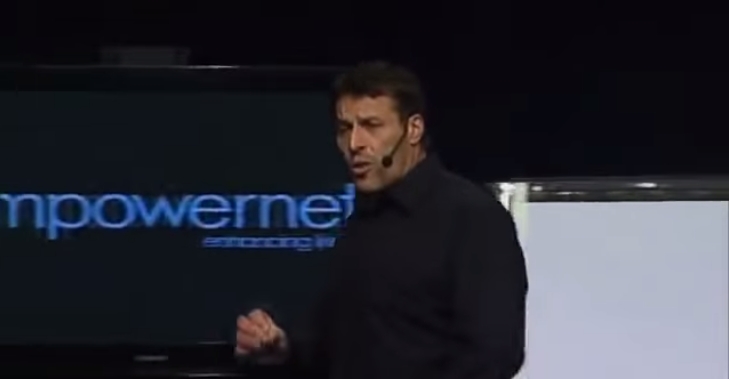 NOTE: Click here if the video above doesn’t play.

A Test of Leadership

Since I asked you all to leave a comment about what you thought about the video, I wanted to take this moment, while I have your attention to share with you a story of leadership that hold a lot of meaning for me.

I was living in North Florida with my family. This was after the house fire. We had finished up putting new floors in the single wide trailer and we were all living there;

I was still working on and off as a farm hand, but I had finally found steady work at a factory. My job was a floater, and what that meant was that anywhere in the plant they needed help, they’d send me.

If you’ve heard any of my stories before, I was true to my nature. I was a hard worker and even though I was just a grunt, I had earned the respect of my line leaders, my supervisors and the plant superintendent.

It didn’t win me too many fans among the other workers, but I was a “good man to have your pocket” as I was told.

I worked hard, learned about the job, learned about how the plant runs and soon I found, that with the influence I started building, I found that I was moving out from under the grunt work and the jobs they called me to do was lighter and lighter, even though the pay didn’t go up much, (just a few cents every now and then).

One day, I was working on my regular line that usually finished early. We didn’t talk and joke around too much. We just wanted to get the work done and go home because there was a pesky practice in the plant.

You had to finish whatever work was allotted for the day, or you come in early the next day and finish it – or you stayed late the next day if coming in early wasn’t possible. Mind you, we normally worked 10 to 12 hour days.

That day, I was feeding the line and when everyone thought the work was done, out came two more full pallets, about 30 minutes before everyone was to leave for the day. Apparently another line fell short and the extra work was passed on to us.

As the line started grumbling and yelling at the poor guy who had to bring those pallets from the freezer, the line supervisor turned to me and asked what I thought we should do.

As my influence grew he had begun asking my advice from time to time, so I asked him, “do you really want to know? Get the super here and I’ll tell you.”

So it took about 5 minutes and the super came and I looked at them both and asked, “what’s the plan? We’re 10 minutes from close and we’ve already had to come in early and stay late 3 days in a row because other lines are falling short and we’re apparently the go to guys for when that happens.”

Neither of them said anything.

I was able to see the situation as it was and explained how we had become the back up plan for when another team falls behind. I showed how some days we’d finish an hour early, or work so fast during the week that we’d have half a day with nothing to do, in which case they split us up, make us all floaters and send us to different places.

But instead of blaming anyone or talking about how unfair it was as the rest of the line was behind me, I saw the situation better than it was.

So I asked the superintendent, “since this line had become the top producers in the plant, don’t you think we should be rewarded for moving the numbers up, not punished for producing more by giving us more work?”

My line supervisor didn’t have anything to say. He just looked at me trying to figure out what I was thinking. Then the superintendent laughed to himself and asked me, “What’d you have in mind?”

That’s when I said, two pallets normally take a long time to get done.

My line supervisor agreed saying it would take around 2 hours at the speed the line works.

I said, we can get it done in one hour.

The line behind me started to grumble again and I said, “we get it done in one hour and we get half a day off tomorrow with pay. If we have to come in early or stay late when we don’t finish our work, we should be rewarded when we have to finish someone else’s“.

The superintendent laughed and said, “get it done in one hour and you have a deal.”

My supervisor looked at me and said, “there’s no way we can get that done in an hour.”

I said, “if we get the tubs near the end of the line, and bring a second feeder we can. I’ll worry about getting the finished pallets to the freezer.”

I mentioned I had studied how the plant works, and being a floater and having done everyone’s job as well as knowing OSHA regulations, I knew exactly how to save time.

The normal process is that one pallet would be brought and while everything was being processed, the line would have to stop quite frequently to clear out, then we’d have to stop again and wait for the new pallet to be loaded and to begin feeding the line.

For every pallet, the line wasn’t producing for around 30 to 40 minutes and I knew if we didn’t have certain delays not only could we get it done in an hour, but we would probably have time to spare.

So we got to work, and the line never had to stop even once.

I had the tubs placed right at the end of the line and I built the pallets right there so there were no delays or stopping, and with the second feeder the maintenance and cleaning crew brought over, we were working both pallets at once.

We finished right at the top of the hour, and I could see everyone was tired, but excited. They were laughing that they had just broken some kind of record and the only thing my supervisor could do was nod his head up and down in approval and say, “damn people. good job.

No sooner than we finished the superintendent walked up to me, shook my hand and said, “In all my years working here I would have never believed it was possible. I’d have called you a liar saying you could have done it in an hour and I’m glad I was wrong.”

And, he gave us half the off as agreed so we only worked 5 hours the next day and everyone was really grateful for that since it was a Saturday.

My supervisor never knew it, but the superintendent asked me if I wanted to be a line supervisor, and I turned it down. I said I was tired of working the line, so he gave me a promotion from being a floater, and moved me permanently to another part of the plant where the work was much lighter.

From that point on he’d ask me, “how’d you make this work better?” in different areas of the plant where I floated but I only told him what would make it easier for the people working those positions.

I’m not sure all of it would save time, but I remember well what it was like, falling out of bed because you’re dreaming you’re still at work and actually motioning out the job.

So I guess I have a fourth mandate of leadership I’d like to add.

You see, one of the things I learned from working so many odd jobs is that the leaders of crews are often the ones that make it better for everyone else. They may not have the title or the pay but they do have the influence, and one of the things I noticed was that those people?

When they see others griping and complaining, they are the ones that step up to create a solution and make it easier on people.

So that’s my number four; look for opportunities to make it better for others.

And as time goes by, if you’re consistent, not only do you create influence and emerge as a leader, but you find that you become the person everyone turns to because you create a level of energy that’s very different than everyone else.

I’d love to hear your thoughts!

Entrepreneur, programmer, musician, stay at home uncle, video game aficionado, movie connoisseur, pool shooting junkie... In other words, just an every day regular guy living an extraordinary life and working from home. Enter your name and email address in the form on the left to find out how you can too.